The German 30 stock index escaped from an almost three-week old range on the four-hour chart but quickly found new resistance near the 200-period simple moving average (SMA) on the way up.

According to the RSI and the Stochastics, there is not much upside left as the indicators are reversing southwards after peaking in the overbought area.

In the event of a downside reversal, the 38.2% Fibonacci retracement of the bearish wave from 13,826 to 7,961 at 10,200, could come to rescue in scope to push the price back towards the 200-period SMA. If efforts prove unsuccessful, the price could retreat towards the 23.6% Fibonacci of 9,345 and the lower part of the range. Beneath that barrier, support could be next detected near 8,695 taken from the troughs of February 2016.

Otherwise, if the bulls pick up steam above the 200-period SMA, the 50% Fibonacci of 10,893 could come next into view. Another winning battle at this point, could add more fuel to the rally, sending the price probably up to the 61.8% Fibonacci of 11,585.

Summarizing, the German 30 index is expected to lose some ground in the short-term unless the 10,200 level stands tall, pushing the price back to the 200-period SMA. 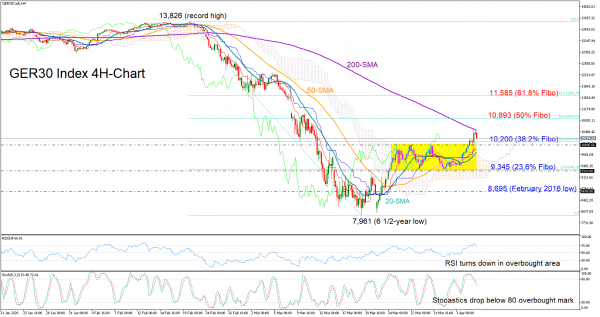