GBPAUD added new legs to the downward pattern it started in early March after piercing the 200-day simple moving average (SMA), with the developing bearish cross between the 20- and 200-day SMAs increasing the case for another extension.

That said, a rebound in the price cannot be ruled out as the RSI and the Stochastics hint oversold conditions, while the MACD seems to be easing its negative momentum. Yet, to set the stage for an immediate upside reversal, the price needs to hold above the 1.8524 support level, allowing the bulls to run towards the 200-day SMA currently at 1.9040. Clearing that barrier, traders may shift attention towards the swing high of 1.9535, which is currently exchanging hands with the 50-day SMA, while slightly higher the 1.9750 barrier may also gather some interest.

Failure to step decisively on the 1.8524 level could confirm additional losses towards 1.8300, a break of which could bring the 1.8090 hurdle next under examination.

Meanwhile in the medium-term picture, the outlook is ready to switch from neutral to bearish in the event the market finds new sellers below 1.8524.

In brief, GBPAUD maintains a bearish trajectory in the short-term picture. However, an upside correction cannot be ruled out in the near term if the 1.8524 mark proves to be a strong support, simultaneously deterring the bears to take control in the medium-term timeframe. 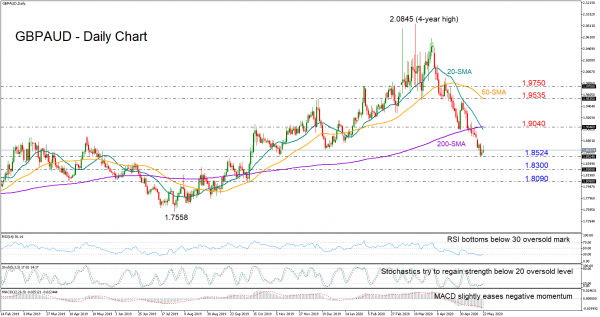 AUDJPY Pulls Back, But Still in Positive Mode
Scroll to top