The Australian dollar remains under pressure and hit new six-week low at 0.6826 on Wednesday, in extension of Tuesday’s 0.4% fall.

Fears of the impact of Coronavirus on Chinese economy keep the Aussie at the back foot, but today’s fresh extension lower failed so far to clearly break below 100DMA (0.6838).

Overextended 14-d momentum is reversing up and daily stochastic is bottoming in the oversold territory, which could give a breather to larger bears and signal consolidation before downtrend resumes.

Traders focus on Thursday’s release of Australian labor sector report which could give more clues about the possible action of the RBA on their 4 Feb policy meeting.

Forecast show high expectations for rate cut that would increase pressure on Aussie. 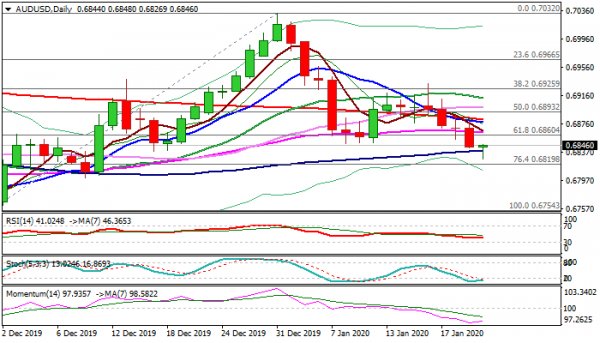 EURUSD On The Ropes